The Best Pokémon Memes – When Fans Write the Script

From shocked Pikachu, to ageless Ash, to terrible at being terrible Team Rocket, the internet loves a good Pokémon meme. Indeed, even your grandmother probably recognizes the cute electric mouse. So with each new social media platform that emerges, it’s only a matter of time before the meme battles begin!

Memes have been bringing joy and giggles pretty much since the dawn of the internet, but it was Tumblr that really helped them take off. While every fanbase has their favorites, the sheer amount of Pokémon material available (thanks to 1100+ episodes to sift through) means there are Poke-memes for every occasion. Is there anyone left on the planet who hasn’t seen shocked Pikachu? Let’s check out some of the ones that captured our hearts!

What is a Meme?

First things first, let’s make sure we’re all on the same page here. Broadly speaking, an internet meme can mean many things: a catchphrase, an idea, or a concept that is spread by the internet, usually on social media. But, what is now more typically considered a meme is a combination of visual media (image or GIF) with captions added on top. Often the image or text is a reference to popular culture, usually with a comedic or witty agenda.

A Pokémon version of the classic ‘woman yelling at cat’ meme, this version has transformed the ladies into team rocket, and the cat to none other than Pikachu. The original meme was actually a combination of two separate images; a screenshot from a 2011 episode of The Real Housewives of Beverly Hills and someone’s cat who is rather unimpressed with being served veggies.

The emotional upheaval of Housewives cast member Taylor Armstrong, alongside Kyle Richards, telling off a smirky feline struck internet gold back in 2019. From the moment it was first posted on Twitter, this meme has been edited for every fandom and current event under the sun.

Team Rocket and Pikachu as “Lady yelling at cat.” Image via 9gag

Given the eternal rivalry between Team Rocket and Pikachu, the side by side images perfectly capture the personality of the characters as well as how pretty much every episode of Pokémon ends: with Team Rocket in complete meltdown mode.

One Does Not Simply…Recognize Team Rocket

This is another Pokémon version of a classic internet meme, this time taken from the fantasy epic Lord of the Rings. Boromir’s famous words, “one does not simply walk into Mordor”, along with his serious expression and hand position to form a ring, was quickly edited with the basic formula of: One does not simply + action

Where does Team Rocket find tailors on such short notice? Image source

Given Team Rocket’s habit of hilariously bad disguises (that somehow fool Ash every single time?), it was only a matter of time before this meme was applied to their seemingly endless supply of outfits. Even though these memes are all technically different, since it's a collection of screen captures but with the same text, we think it still counts as one entry onto this list.

Team Rocket are lovable, bumbling villains, and their flair for fashion just makes us (kind of) root for them even more.

This classic meme was first uploaded as a reaction to a post on Tumblr on September 26th, 2018 and was taken from Season 1, Episode 10: “Bulbasaur and the Hidden Village”. Since it was first posted, the image quickly gained popularity as a comical way to feign surprise at a predictable or mundane event.

Whether this meme was created organically by a fan or was a stealthy marketing campaign, Wired actually has a whole article examining the rise in popularity of the image, which happened at the same time as the release of the Detective Pikachu movie. We’re just here for the wholesome Pikachu images, but make of it what you will.

Pikachu, taking over the internet one meme at a time. Image source

In fact, the meme is so well known people no longer have to post the image, they can just reply in a comment with *shocked Pikachu face*, and everyone gets it. Well done, Pikachu!

Ash Ketchum is like many animated characters in long-running series, he mysteriously seems to stay the same age. His journey to become a Pokémon Master began when he was just 10 years, 10 months, and 10 days old, and yet, it’s been almost 25 years since the debut of the first Pokémon episode and he looks suspiciously the same age. Either he has access to an incredible skincare routine or there’s some strange Pokémon magic going on here.

This meme combines the classically quizzical character of Dexter from Dexter’s Lab and Ash to highlight the existential crisis we all face when we grow older than our animated idols. 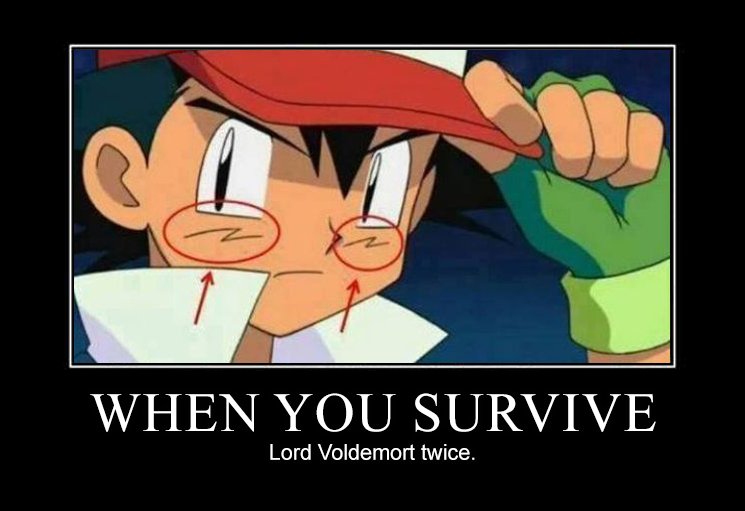 Two infamous pre-teen characters collide with this Harry Potter x Ash Ketchum meme. The beloved British book series revolves around the boy with the lightning bolt scar, so one astute fan found it mighty suspicious that Ash seems to have two of them on his cheeks. Naturally, the only conclusion one could draw from this design choice was that the Pokémon Master-in-training had secretly defeated the Dark Lord, not once, but twice, before turning away from the world of magic. The secret is out, Ash!

So Many Memes, So Little Time

The beauty of meme culture is that it is always evolving. Someone will dig up a cultural gem and bring it to life again (please, no more Rick Rolling), or a new series will take over the zeitgeist. Because of that, it’s a given that there will always be more Pokémon memes to explore and chuckle at. And with meme generator websites a dime a dozen, you can easily contribute to the canon. If you can’t be a Pokémon Trainer, how about a meme master instead?

Which Pokémon meme is your favorite? Have you got any gems that we left out? Let us know in the comments below!