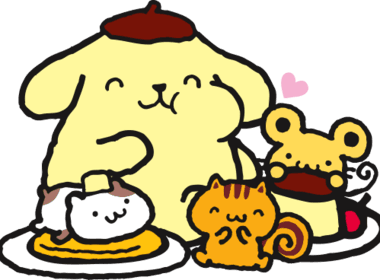 Pompompurin, the pudding-like golden retriever, is one of Sanrio’s most popular characters along with Hello Kitty and Cinnamonroll. As big pompompurin fans, we wondered how much we actually know about him, so we did some digging. Here are some interesting facts about Pompompurin!

1. Pompompurin is a shoe collector

As like many puppies, Pompompurin has a slight obsession with shoes. He loves to take his parent’s shoes and hide them. Shoe collecting is in fact his main hobby. This is not his only hobby though as he also enjoys sleeping, spending time with friends, and doing “purin aerobics”.

This cutie was born on April 16th, which means he’s an Aries. We’re not sure if Sanrio intended for that, though Pompompurin’s personality does match well with the main Aries traits of curiosity, energetic, upbeat, and enthusiastic so it is fitting.

Pompompurin has his very own purin themed cafe in 4 locations across Japan: Harajuku, the kawaii district in Tokyo, Yokohama, Nagoya, and Osaka!

The menu selection varies by location and has a range of items from curry, to beef stroganoff, udon, to chinese dumplings! There is also a selection of super kawaii desserts and drinks.

How many of these facts did you already know? Let us know in the comments!