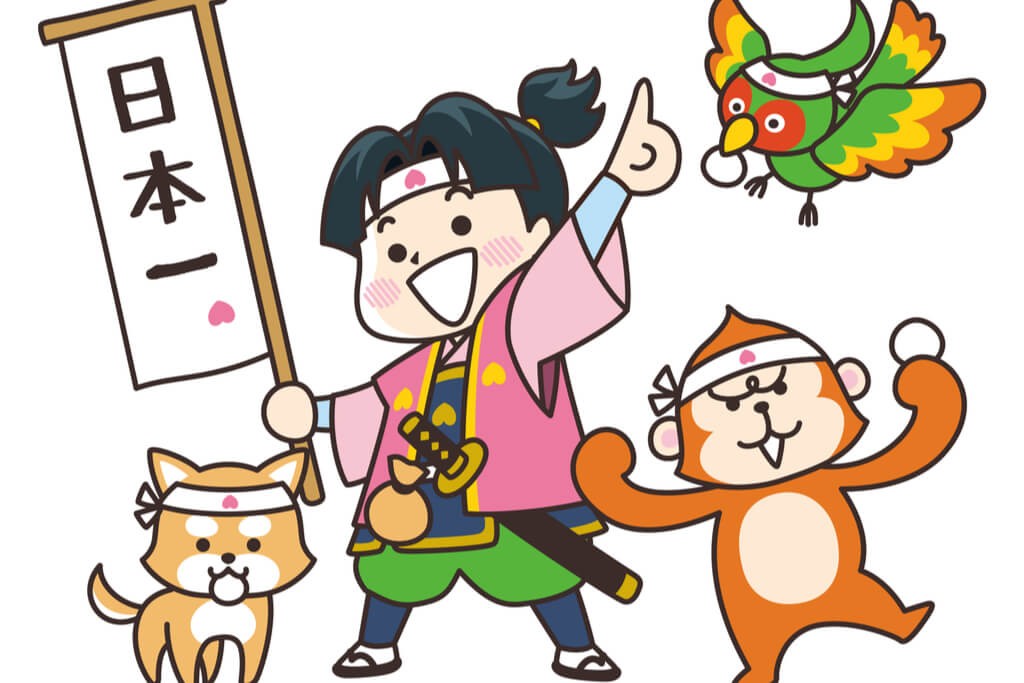 Most of us have our childhood enriched with many widely known fairy tales such as Snow White, Little Mermaid, or oral folk tales told by our grandparents. But what about Japanese folktales? Have you ever heard or read about any myths or legends from such an ancient and rich culture like Japan?

If you’re in love with Japanese culture, you’ll surely want to know more about the classic tales that influence things like anime, manga, and even mascots. Today, we’re going to tell you about three famous Japanese folktales every Japanese person has learned by heart ever since they were young.

Once upon a time, there was a couple who had passed their forties but still had no children. One day, while doing laundry by the river, the woman saw a huge peach floating in the stream and brought it home. When the husband was about to cut the peach in half, he suddenly saw a healthy boy inside the peach.

Believing this was a present from God, the couple was overwhelmed with joy and named the child Momotaro (meaning “Peach Boy” or boy born from a peach), raising him as their own child.

When Momotaro grew up years later, the oni (demons) from an island began to riot and threaten the life of many people. Peach Boy decided to leave his family to defeat them and bring peace to the world. Along the way, Momotaro met and befriended a dog, a monkey, and a pheasant, who could all speak human language and agreed to help him hunt down the villains.

When they reached the demon island, Momotaro and his friends found a secret way to enter the demons’ den and beat them to pieces. The leader of the demons had to surrender and hand over all the treasure they had stolen to Momotaro. The heroes returned home with his family and they lived happily ever after.

Momotaro: A Mascot to End All Mascots

This Japanese folk tale is said to originate in the Okayama region, and Momotaro is an unofficial tourist mascot of the city. His image – a boy coming from a peach – is often found on souvenirs and gifts. The Peach Boy hero also features in a lot of games, manga, and anime, and is used as a role model for Japanese children’s books.

In a different version of the story, Momotaro gave Kibidango – millet dumplings similar to certain types of mochi – to the three talking animals when they became friends. Nowadays, kibidango has become Okayama Prefecture’s sweet specialty. Moreover, Megijima – a small island near Takamatsu city, Kagawa Prefecture was believed to be the demons’ home in Momotaro’s tale due to the large amount of man-made caves there..

Want to get the kawaii Japanese goods featuring cute characters, traditional and modern? YumeTwins sends everything from Japanese plushies to stationery straight from Japan to your door each month!

Urashima Taro: One of the Oldest Japanese Folktales

Urashima Taro, the main character of this early 5th century tale, was a young fisherman who saved a sea turtle from being bullied by the children while he was walking along the seashore. In return for saving its life, the turtle invited Urashima Taro to visit Ryugu-Jo – an undersea palace.

In the castle, he was welcomed and treated with exotic delicacies by the beautiful princess Otohime. After a few days enjoying the luxurious life at the palace, he started to miss his family, so he asked the princess to let him go back home. Before parting, princess Otohime gave him a box called Tamatebako as her gift and told him not to open it under any circumstances.

When returned to his village, Taro realized everything had changed completely! His home was no longer there and his acquaintances, including his parents, seemed to all be gone. After talking to a man passing by, he came to know that 300 years had passed since the day he went into the deep sea.

In his grief, Taro forgot the warning told by the princess and opened the box. A white smoke rose out of the box and covered Taro, turning him into a gray-haired old man.

Another variant of this story said Otohime actually told him to open the box when he ran into trouble and that’s why Taro opened it. Whichever the case was, it is believed the Tamatebako keeps Taro’s age as a day spent undersea might equal several years on land.

Many people think it was based on a real story since you can still take a look at the memorabilia of the Tamatebako and learn more about this legend at Urashima Shrine in Kyoto Prefecture. Kagoshima Prefecture – in the Southern part of Japan – is also said to be the birthplace of Urashima Taro.

In a small town, there lived an infertile old couple who made a living by cutting bamboo. One day, while cutting bamboo in the forest, the old man discovered a bamboo that was emitting a strange yellow light. Out of curiosity, he approached it and found inside the bamboo stalk, there was a little girl just the size of a thumb.

The old couple decided to adopt her as their own child and named the girl Kaguya-hime. Ever since, every time the old man cut bamboo, he would find a gold bar inside the bamboo stick. They got rich quickly and their little girl also grew up to become a beautiful young lady.

Word of her beauty spread throughout the country and attracted lots of men, including the Emperor. They came to propose to her, but she turned all of them down.

On the night of a spring full moon, Kaguyahime cried and confessed that she actually came from the moon, and although she didn’t want to leave them, she had to return on the next full moon. Despite the couple’s effort to prevent her from leaving, the people of the moon eventually came to pick her up.

Before returning to the moon, the princess gave her old parents the Elixir of Life as her tribute. In the end, the couple burned it at the top of a mountain since their life would be meaningless without their daughter.

Do you know the tale of the Bamboo Cutter is also one of the folktales from Fuji – as in Mt. Fuji – Japan’s cultural symbol? In Japanese, to never die is called 不死 (fushi) so people make a theory that mount Fuji’s name comes from the legend of “the mountain where the Elixir of Life, or “fushi” medicine” was burned. This story is one of the many fun ways to discover Mt. Fuji.

You can also enjoy this tale as a Ghibli film, called The Tale of Princess Kaguya. It’s a really interesting film and one of the best Ghibli movies that many people have never seen.

The folklore or oral tradition of each nation is a painting that reflects the personality and soul of its people. In the case of Japan, loyalty, courage, strength, and wisdom are some of the most representative characteristics they are proud of.

If you want to learn more about the culture of Japan, it’s definitely not a bad idea to take a look at Japanese folklore. What other Japanese fairy tales and folktales have you heard about?  Share your favorite classic tales in the comments below!