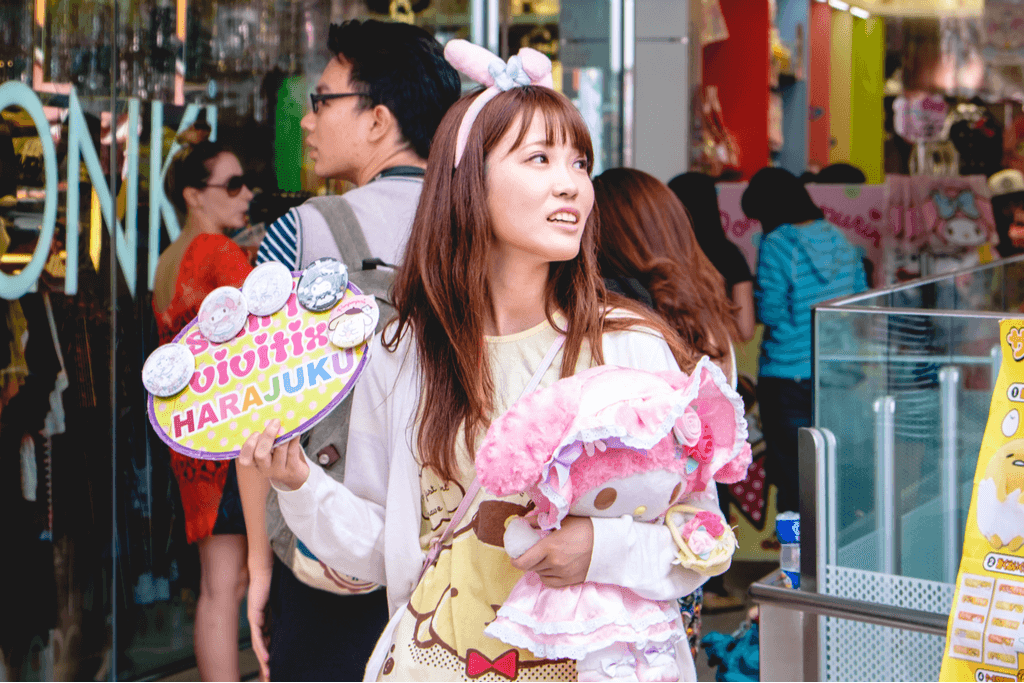 Anyone who knows anything about Japan is familiar with the word kawaii which means ‘cute.’ That being said, the term kawaii has its own special connotations which have transcended the meaning of simply ‘cute.’ This also means that there is more than just one kawaii aesthetic out there.

Want to know how you can embody the kawaii aesthetic and live the kawaii life too? Read on for more!

The word ‘kawaii’ has been around in Japanese terminology for over 100 years. Kawaii originally started when Takehisa Yumeji began to draw ‘cute’ manga characters in 1914.

In fact, cute products and the idea of making people appear innocent by enlarging their eyes is said to have been started by Takehisa Yumeji at that time.

Fast forward to 1975, and Sanrio develops their character Hello Kitty. A plump, pastel-colored, rounded kitten, Hello Kitty captured the hearts of schoolgirls everywhere. Prior to this, schoolgirls at the time had started to use a cute handwriting style with swirls and (maybe the very first) emojis, known as ‘kawaii girls handwriting.’

It was around the time that kawaii handwriting developed and Hello Kitty was released that the term ‘kawaii’ came into usage not simply as an adjective for ‘cute’ but also as an aesthetic. What was this aesthetic? I hear you cry.

Looking to bring more kawaii into your life? Check out YumeTwins! YumeTwins sends the cutest Japanese plushies, stationery, and other character goods straight from Tokyo to your door!

From here, kawaii culture saw a boom, particularly in 1982 when the culture magazine Olive was published as a sister companion to the Popeye ‘city boy’ magazine. Olive was marketed as a brightly colored tome for ‘city girls.’ Its first edition featured the theme ‘color savvy,’ until it suddenly stopped and saw a giant rebrand in 1983.

The magazine changed its direction from ‘city girls’ to ‘romantic girls’ (who could imagine that happening today?!) and attracted another different group of fans, in addition to its older readers, fuelling part of the kawaii revolution. These girls wore ribbons, frilly dresses, and bows, cementing the kawaii aesthetic through its kawaii style.

The kawaii girls who followed Olive magazine wore certain styles that came to be known as ‘kawaii fashion,’ such as Kenko Isao’s brand (started in 1973) Pink House. Pink House had frills in pinks, creams, and pastel colors and catered perfectly to the girls of the kawaii revolution. Another group of kawaii girls focussed on tiny accessories and multiple super-small items. This group of kawaii girls came to be known as ‘Harajuku fashion.’

Let’s have a look at some other types of Kawaii!

So as we learned, kawaii itself is cute, innocent looking things in pastel colors. But the kawaii aesthetic in its current form has been around for over 50 years, and in this time, it has spurned several sub-genres. Some of these sub-genres are even becoming larger and larger in the Japanese street fashion scene.

‘Yume’ is Japanese for ‘dream.’ Yume-kawaii refers to dreamlike things incorporated into the kawaii look. We’re talking unicorns, fairies, rainbows, and more. Occasionally ‘nightmare’ elements are included in the outfits, such as eyeball keychains.

Yume-kawaii fashion includes things like feathers, frills, and ribbons in abundance. The colors are normally white and pastel colors like pink. Make-up is done to make eyes look big and often sees glitter in some form.

Yami-kawaii (sick-cute), which refers to sick and dark kawaii culture, first appeared in 2015 but has recently taken on a new meaning. Recently, the yami-kawaii aesthetic – which incorporates dark colors and fake blood into the normal kawaii look – has received positive press for its way for fans to express their thoughts and negative feelings in a way they might not be able to otherwise.

Fans of this alternative Kawaii fashion often use fake blood as makeup and dark t-shirts with deep or scary slogans on, in addition to pastel colors and makeup that accentuates the eyes. Accessories can include ‘blood’ filled syringes, knives, and more.

The colors generally stay around the same as mainstream kawaii culture, with added grotesque elements. Even gross things can be made neon and kawaii in this subculture!

Accessories include eyeballs and pink syringes, while popular guro-kawaii characters include Gloomy Bear, a cute, man-eating pink bear. Even the popular fashion store, BEAMS has a Gloomy Bear range. Even character series like the super violent Happy Tree Friends end up on T-shirts for this style.

A relatively new subculture of kawaii aesthetic, it could be said that this is the most conceived of all the kawaii types.

Turning the usual concept of ‘kawaii’ on its head, fans of busu-kawaii (ugly-cute) will pose in pictures by pulling ‘ugly’ faces and generally poking fun at the kawaii aesthetic. In true kawaii form, frills, pastel colors, skirts, and long hair in plaits are abundant.

Let us know what your favorite type of kawaii aesthetic is. And please tag us if you’ve dressed in any kawaii fashion lately. We’re looking forward to seeing your take on this cute Japanese word!

Ema are beautiful wooden plaques at Japanese shrines on which one can write a wish on the back in order for that wish to come true.