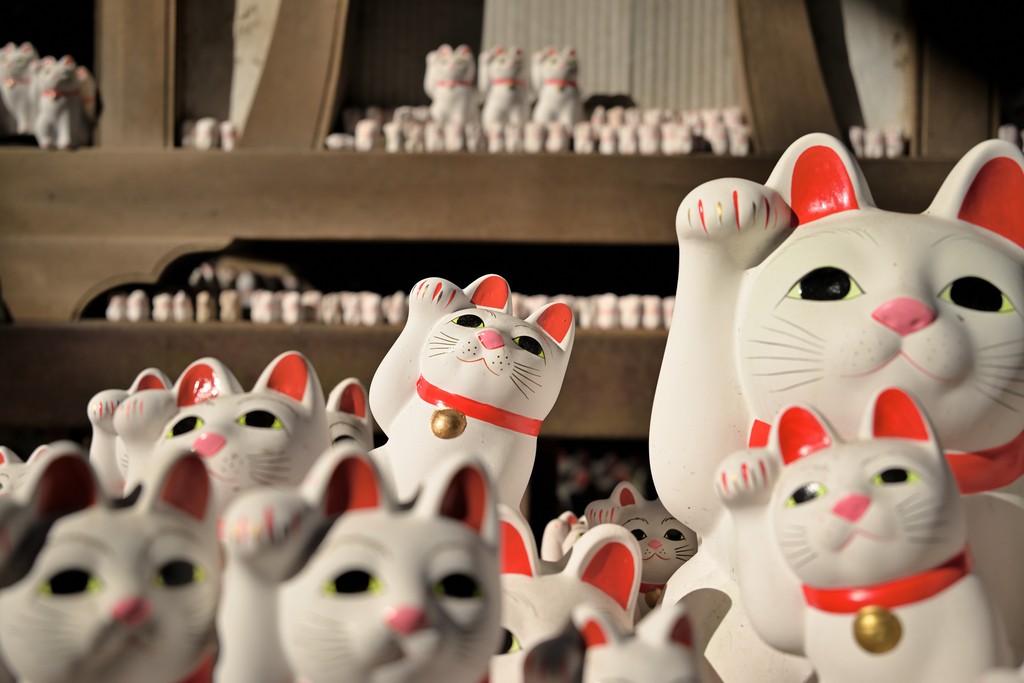 There are thousands of shrines and temples in Japan. They’re part and parcel of the landscape and always a reminder of history and a place to find calm even if only for a few minutes amidst a busy modern world.

Within Tokyo, the largest metropolis in the world, it’s amazing how much contrast there is between modern buildings and ancient structures. You can walk down a street with a skyscraper built one week ago, and tucked away in a little corner just next door is a 400 year Shinto shrine left untouched by the ripples of time.

What’s more, within the melange of historical shrines and temples nestled in little oases of green within Tokyo are certain shrines or Buddhist temples made famous, especially in recent years, due to what particular deities or specialties the specific shrines have.

Two of the most famous unique shrines or temples like these are both found in Tokyo, and both have animal themes as well. If you’re versed in Japanese literature or folklore, you may know the importance of foxes and cats to Japanese culture. They both appear in all sorts of stories, new and old, and they are well loved and respected within Japan even to this day.

Let’s explore two of these places of worship that you won’t want to miss on your next visit to Tokyo!

In the Edo period, Oji Inari Shrine was thought to be the top-ranking Inari shrine in Kanto region. In those days, there was a legend that on New Year’s Eve, foxes from across the Kanto region -foxes were regarded as the servants of Inari, a god of fertility and fortune- gathered under an enoki tree near the shrine, put on clothes there, and moved on to the shrine to offer prayers.

Oji Inari Shrine is tucked away in northwestern Tokyo, and has a colorful history, as it was considered one of the most important Inari (a god of rice) shrines in the entire region. This is mostly due to a Japanese legend that says foxes from across the region would gather at a tree near the shrine, don human costumes, and head on over to the shrine to pray, giving this place a long and storied history.

Because of this interesting story and the curiosity that it sparks from people all over, in 1993 the shrine decided to start holding its now annual Kitsune-no-Gyoretsu, or Fox Procession. This is held on New Year’s during hatsumode. Hatsumode is the Japanese term for the first shrine or temple visit of each new year, and it’s an important tradition that both religious and non-religious Japanese are surely to take part in. During hatsumode it’s common for attendees to pray for good luck and health for friends and family for the upcoming year.

Within the festivities there is a parade in which adults and children alike dress like foxes and move from a neighboring shrine (Shozoku Inari Shrine) to Oji Inari Shrine itself as soon as midnight strikes at New Year’s. Once the revelers arrive, there’s music and traditional dancing for onlookers to enjoy. On top of that, there are all sorts of delicious bites to eat, including many with cute fox motifs for fun!

Attendees almost always report having a great time at the event and although it gets more and more crowded each year, it’s an exciting event that’s worth the visit!

Dog-lovers beware, Gotokuji Temple is the place to go for cat-lovers! With thousands of cat statues on the premises, it’s admittedly a great place to take insta-worthy pics, but do be sure to respect the area and other visitors.

Visitors to this temple located in Setagaya-ward in southwestern Tokyo can purchase a maneki-neko style lucky cat statue in various sizes and pray that it answers a certain wish. Once you dedicate your wish, most visitors tend to leave the cat statue on the temple grounds in order for their wish to be fulfilled. You may, however, take the statue home as well. It’s often said that once a wish becomes fulfilled you should visit the temple once again to show your gratitude.

The story behind how this temple rose to prominence starts in the early 1600s. A lord of the Omi-Hikone Domain, Ii Naotaka, was traveling when a sudden violent thunderstorm appeared. Legend goes that a cat invited him into the temple nearby and that it saved his life.

As a token of his appreciation to the cat, Naotaka took care of the temple and dedicated it to his family. When it was renamed Gotokuji after he passed away, this was done to pay homage to his Buddhist name of Kyushoin-den Gotokuten Ei-Daikoji.

Even that cat who helped Naotaka was deified as a ‘Fortune-Inviting Kannon’ for eternity, and because of the fortune-bringing ability of this deity, the maneki-neko lucky cat figurines have been a staple of the temple ever since and have encouraged worshippers to visit.

Which of these two places of worship are you most interested in visiting? Are there any other famous Japanese animals from folktales that you’re interested in? Let us know your thoughts in the comments!