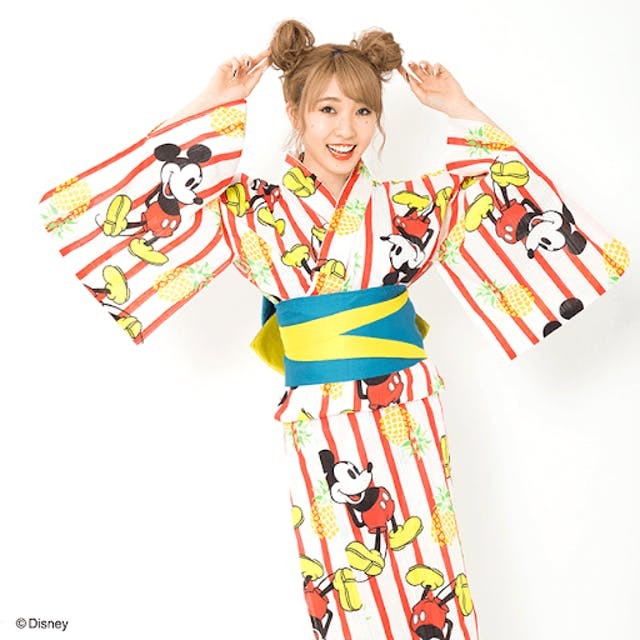 When you think about summer in Japan, yukata is one of the things that will surely spring to mind. Yukata is one of many traditional Japanese attire. It’s lighter and thinner than Kimono, and is usually worn to casual occasions such as Japanese festivals (Matsuri). Many yukatas also have beautiful patterns such as flowers and various color designs, which makes it so refreshing to see.

Before we continue on our version of the top 5 cutest yukata pattern, you can find out about other traditional Japanese fashion here.

Who doesn’t know about Disney characters? Mickey Mouse, Minnie Mouse, Daisy, Donald Duck, Goofy, Max… all of them are featured in this yukata line from Japanese fashion brand Poneycomb Tokyo. What’s special about these Yukata is that they're bundled with a Tsukuriobi, which consists of an easy-to-put-on waistband and a pre-tied ribbon to slip onto the sash. So, you don’t need to worry about tying on your own.

For all Cardcaptor Sakura fans, make sure that you don’t miss this yukata! This adorable yet subtle yukata created by Anime fashion label Super Groupies is inspired from the Cardcaptor Sakura series. Not just a yukata, this cute set is also accompanied with an Obidome, an ornament that attaches to the obi (kimono sash). Taking a closer look at the obidome, you can see that Kero-chan and Suppi take an appearance there!

Butterflies and goldfish patterns are already too mainstream, so try this feline patterned yukata instead! Released by Felissimo, the premiere provider of cat-themed fashion and lifestyle items in Japan, this yukata patterns consist of a kitty and the blossoms of the silver vine plant that has catnip-like properties. Felissimo also offers 3 obi designs to match this adorable yukata. It’s so suitable for cat lovers who want to be fashionable and unique at the same time!

From afar, they look like ordinary yukata. But after taking a closer look, you can spot the appearances of Disney princesses in the patterns! These brilliant yukata patterns are released by a Japanese casual clothing chain named Right-on. Featuring 4 Disney princesses in 4 kinds of yukata, this yukata line is part of Right-on’s kids’ collection. Each yukata set also includes a floral character charm that can be used as a hair accessory or clipped to the obi. Too bad they’re only for kids, right?

The last and our No.1 cutest yukata pattern is this Sailor Moon yukata! Designed by kimono maker Kyoto Marubeni, this yukata set comes with a yukata and a gorgeous embroidered obi. You can choose between Jupiter, Mercury, Mars, Venus, and Sailor Moon prints. Each print has their own color and matching obi with an embroidered image of Luna the cat.